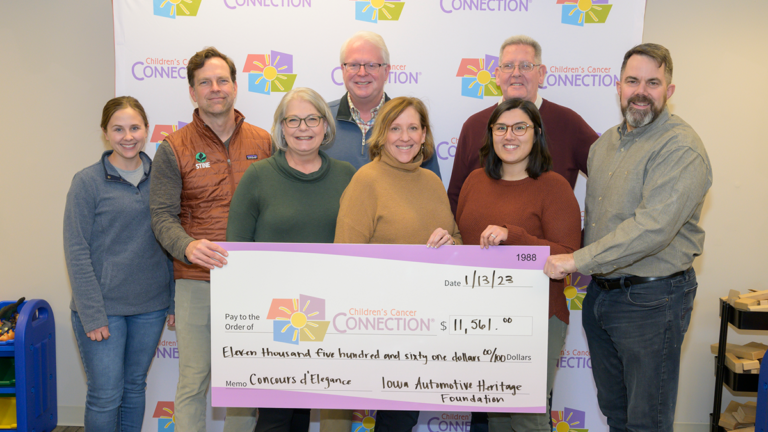 On Friday, Jan. 11, the Iowa Automotive Heritage Foundation (IAHF) and Des Moines Concours presented Children’s Cancer Connection with a check for $11,561 made up of $10,000 from the IAHF and the rest donated by day-of-event attendees. CCC is the official charity partner of the annual Des Moines Concours d’Elegance show.

Children’s Cancer Connection CEO Jennifer Hines said “We’re so grateful for this gift. To put it in perspective, this gift can cover the cost of sending 23 children to Camp Heart Connection or pay for all the hundreds of camper t-shirts for both Oncology and Sibling Camps! We thank the IAHF and the Concours team for this donation and their ongoing partnership since 2014.”

The Iowa Automotive Heritage Foundation has donated a total of $135,000 to CCC since 2014. Children’s Cancer Connection coordinates the volunteer force for the Des Moines Concours event.

This year’s event is set for Sept. 9-10. The Heartland Driving Tour is on Saturday, Sept. 9 and takes drivers along the roads of Iowa and to sites throughout the region. The Tour is open to the public, and a small fee is charged. The Des Moines Concours show is set for Sunday, Sept. 10 and is free to the public to attend. It is a premier automotive exhibition held at the internationally-recognized John and Mary Pappajohn Sculpture Park in downtown Des Moines. Learn more!